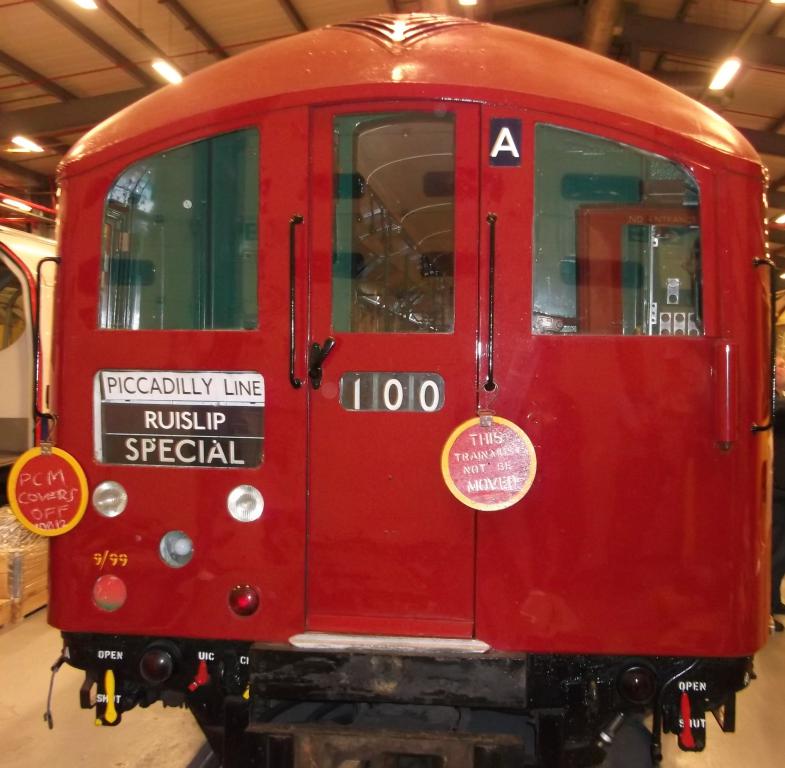 The 1938 stock was the result of an experimental batch of trains called the 1935 stock. The 1935 stock was an experimental train design that was built by Metropolitan-Cammell and consisted of 12 two-carriage units which where marshalled together to make four six-carriage trains. Three of the two-carriage units where streamlined and similar to the 1923 batch of Standard stock, with the fourth set with a front design similar to the later 1938 stock. The marshalled trains where then tested on the Piccadilly line between 1937 and 1940, then absorbed into the 1938 fleet before being withdrawn between 1972 and 1976.

The resulting 1938 stock was intended for use on the New Works Programme extension on the Northern line to High Barnet and Mill Hill East resulting from the electrification of the London and North Eastern Railway (LNER) lines. The fleet consisted of 1,121 carriages and constructed by two companies, Metro-Cammell and the Birmingham Railway Carriage and Wagon, being made up of 644 driving motors, 206 non-driving motors and 271 trailers. However, an additional 167 carriages where needed and came from an additional 91 new carriages and 76 converted carriages. The 1938 stock served the Bakerloo, Northern, Piccadilly, East London (today a part of the London Overground network) and Central lines, eventually being withdrawn on 19 May 1988.

The 1935 stock was built by Metropolitan Cammell in London as an experimental train design, there where twelve two-carriage units constructed, which where marshalled into four six-carriage trains.

Three of these trains where streamlined ans based on the 1923 build of the Standard stock control trailers which where built by Metropolitan Cammell, and the carriages on the fourth set was equip with flat fronts and where almost identical to the 1938 stock, which these where prototypes for. These where the first carriages that where constructed for London Underground that had motors and control equipment underneath the frame, freeing space behind the drivers cabin to increase the number of passengers that could travel in the driving motor, furthermore for evaluation purposes the trains where configured with different equipment.

The carriages where delivered to the Piccadilly line between 1937 and 1940 and where stored at Cockfosters depot during the Second World War. When the war finished the carriages where streamlined at Acton Works who reconstructed the carriages into trailers to use with the 1938 stock. The intention was to operate three trailer carriages into three streamlined units to allow the trains to be extended from six to seven carriages, although similar to the 1938 stock, this would have no compressors. These carriages where fitted with compressors and where numbered 012412 to 012414 to allow for the trailers to be easily identifiable, with only three windows between the end single doors and the first double door where the 1938 stock had four.

Three Standard stock trailers where rebuilt in the 1950s to operate with the remaining flat fronted driving motors, these carriages where numbered 7510 to 7512 and where withdrawn at the same time as the converted driving motors.

These carriages where withdrawn between 1972 and 1976, with the last trailer numbered 012489 being withdrawn in 1976. However, a unit with a flat frontage re-entered service for use with the 1938 stock, the main difference between the two stocks was the drivers door an the 1935 stock was taller and extended into the roof. This was because of the electrification of the Central line route between Epping and Ongar in 1957, this service was provided by two-carriage units of 1935 stock until its replacement, 1962 stock. The last passenger service was in 1966 where the two diving motors where converted into a test train, finally being scrapped in 1975.

The 1938 stock operated on the London Underground until 1988, there was a total of 1,121 carriages constructed by two contractors, Metro-Cammell and the Birmingham Railway Carriage and Wagon, with an additional 167 carriages, 91 newly constructed and 76 conversions, subsequently joining the fleet. These operated on the Bakerloo, Central, Northern and Piccadilly lines during their long lives.

Use on different lines

The 1938 stock was primarily intended for use on the Northern and Bakerloo lines, with an additional seven trains being used on the Piccadilly line. The stock was commissioned by the London Transport Passenger Board (LTPB) under the New Works Programme between 1935 and 1940.

The Northern line received the 1938 stock for use on its new extensions to High Barnet and Mill Hill East and was exclusively served by the 1938 and 1949 stock. However, the trains where showing their age by the late 1960s and the first withdrawals from the Northern line began in the early 1970s with the introduction of the 1972 stock. There where 21 carriages which where scrapped because of the damage they had sustained from a collision, the last 1938 stock in passenger service ran on 14 April 1978. The 1938 stock returned to the Northern line in 1986 when five complete seven-carriage refurbished trains where transferred from the Bakerloo line to boast stock numbers because of rising passenger numbers, these operated until 19 May 1988.

The Bakerloo line received 36 seven-carriage trains from the Northern line between 1971 and 1978. The line was operating the 1972 stock in addition with the 1938 stock in the mid 1970s, however, the 1972 stock was intended to be used on the new Jubilee line, after its opening the Bakerloo line was exclusively served by the 1938 stock until the stock began to be withdrawn in 1981, by 1984 there was 16 trains remaining which where withdrawn by 1984/1985. The trains on the Bakerloo line received a 'extra heavy overhaul' which kept them in service long after their intended withdrawal date, this made the Bakerloo line the last to be served exclusively by the 1938 stock. A three-carriage train was restored to its orional appreaance in 1984, sponsered by a West End theatre agency the train became known as the 'Starlight Express' and worked on the Bakerloo line until 1985 when increasing traffic needed some of the recently withdarawn 1938 stock to boast trainnumbers as a stop-gap.

The Piccadilly line had seven 1938 stock trains which operated with the 1959 stock for much of their lives in service, these where replaced by the 1973 stock and the 1959 stock was transferred to the Northern line to replace the 1938 stock.

The East London line, today a part of the London Overground network, also saw the 1938 stock, which replaced the older Q23 stock.

The Central line received a single 1938 trailer carriage which was inserted into a 1960 stock train during the mid 1980s, this was used along the Woodford to Hainault and Epping to Ongar sections of the line. An additional unit, number 10177 which latterly was shipped to Alderney, worked on the Epping to Ongar shuttle between November 1957 and June 1960.

When the 1959 stock was approaching its life expectancy, five trains that previously worked on the Bakerloo line received a further overhaul in the mid 1980s. These where transferred to the Northern line for a further two years of service before the last passenger service on 19 May 1988.

There where plans to operate a nine-carriage train service on the Northern line, as a part of the London Transport Passenger Board (LTPB) New Works Programme, these carriages where numbered differently than other carriages with the first digit '1' being replaced with a '9'.

When the Northern and Bakerloo line extensions where scaled back, there was the need to order additional stock to balance the stocks, this led to the ordering of the dubbed 1949 stock, where the carriages where renumbered in the early 1950s. The driving motors, which had been altered for nine-carriage trains for the Northern line, had their number changed from beginning with a '9' back to a '1', the driving motors where numbered 10342 to 1033, 11324 - 11333 and the trailers 012389 - 012408. Furthermore twenty eight of the thirty non driving motors where renumbered with the exceptions of carriage numbers 92055 - 92058 and where rebuilt into Uncoupling Non-Driving Motor along with twenty Special Non-Driving Motors, there where twenty two carriages that where rebuilt into Uncoupling Non-Driving Motor and renumbered 30000 - 30021.

Fifty eight Standard stock trailers which where originally constructed in 1927 where converted in 1938 to work with the 1938 stock, these carriages where renumbered 70513 - 70570. The first carriage to be withdrawn sustained significant damage in an accident in Watford in 1962, the last carriage was withdrawn in 1973.

There was one significant accident involving the 1938 stock occurred at Moorgate on 28 February 1975, when a train crashed into the end wall of the station killing 43 people and the driver.

There are some carriages which have been preserved and refurbished, including carriages form the first built unit, is currently at the London Transport Museum Acton depot. The preserved units have been restored to their original red liveries, one has an orange roof which was standard for the Bakerloo line, and another with a grey roof which was used on the other lines. The preserved units are occasionally used in films.

A drivers cabin has been preserved at the London Transport Museum in Convent Garden, however this was not included with the museums refurbishment, however a driving simulator was fitted and located next to the driving trailer.

Thee ex-London and North Eastern Railway (LNER) carriages from the 1938 stock have been converted for use as ballast motors, another was modified to be used as a personnel carrier and a trailer carriage being used as a stores vehicle at Ealing Common depot.

The 1938 stock is still in use today, on the Isle of White Island line, the low tunnel clearances on the line make it ideal for using older tube stocks. The fleet was extensively refurbished and turned into two-carriage sets and reclassified as Class 483. Transferred to the line in 1988 they replaced the Standard stock carriages that where operating on the line until that point. There are six remaining ex-London and North Eastern Railway (LNER) self-propelling carriages on units 6, 7, and 8. 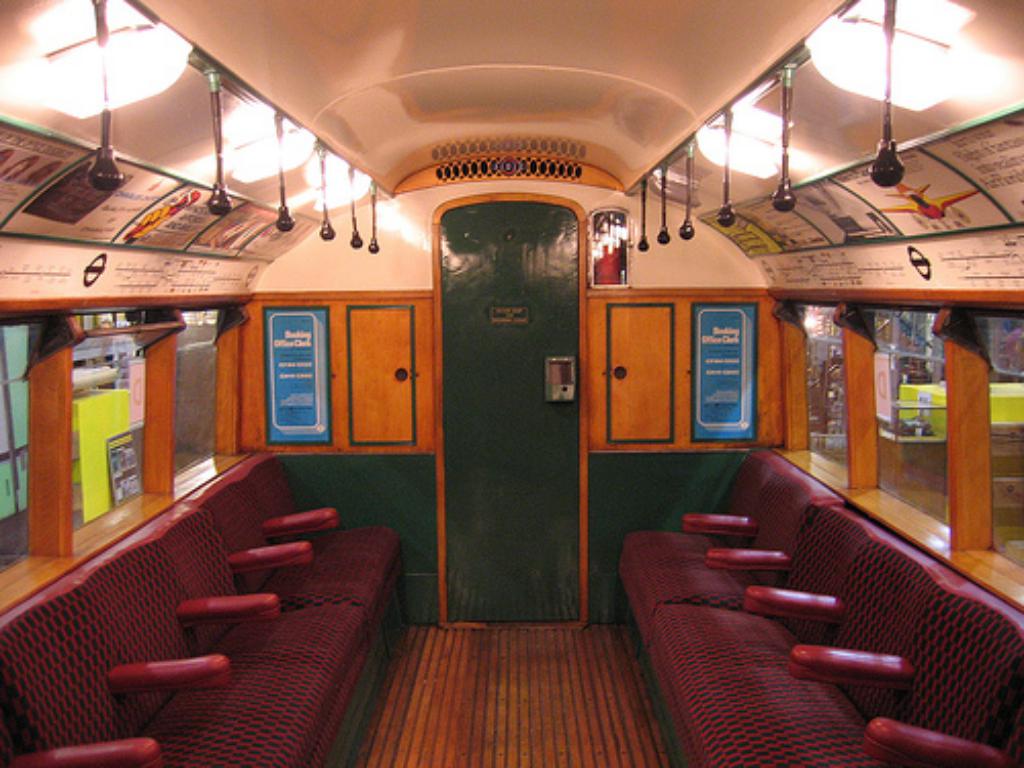 Example of interior of 1938 stock 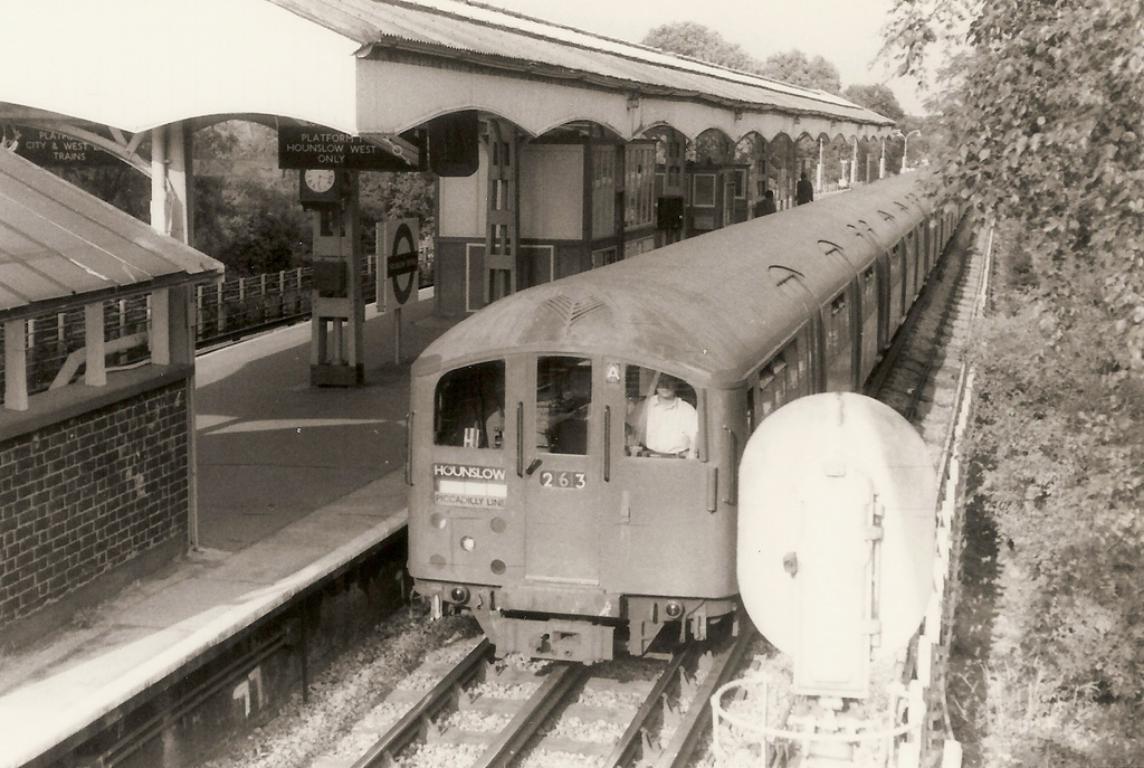 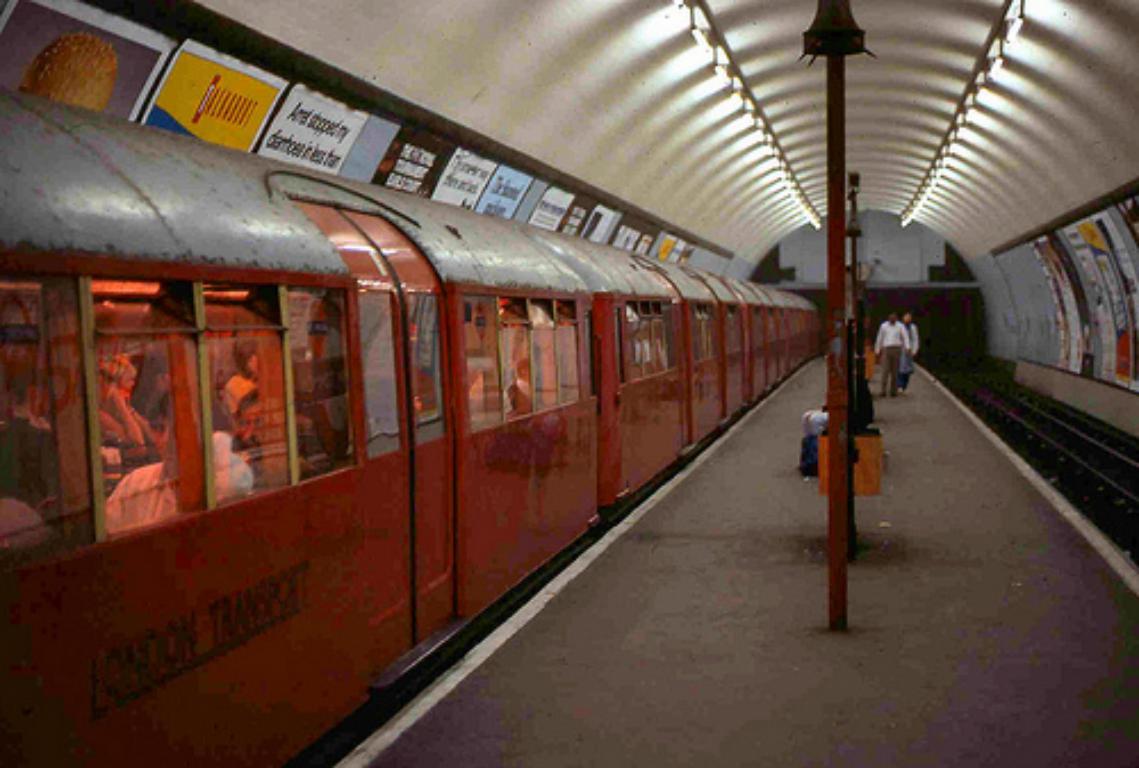 Northen line at an Island platform 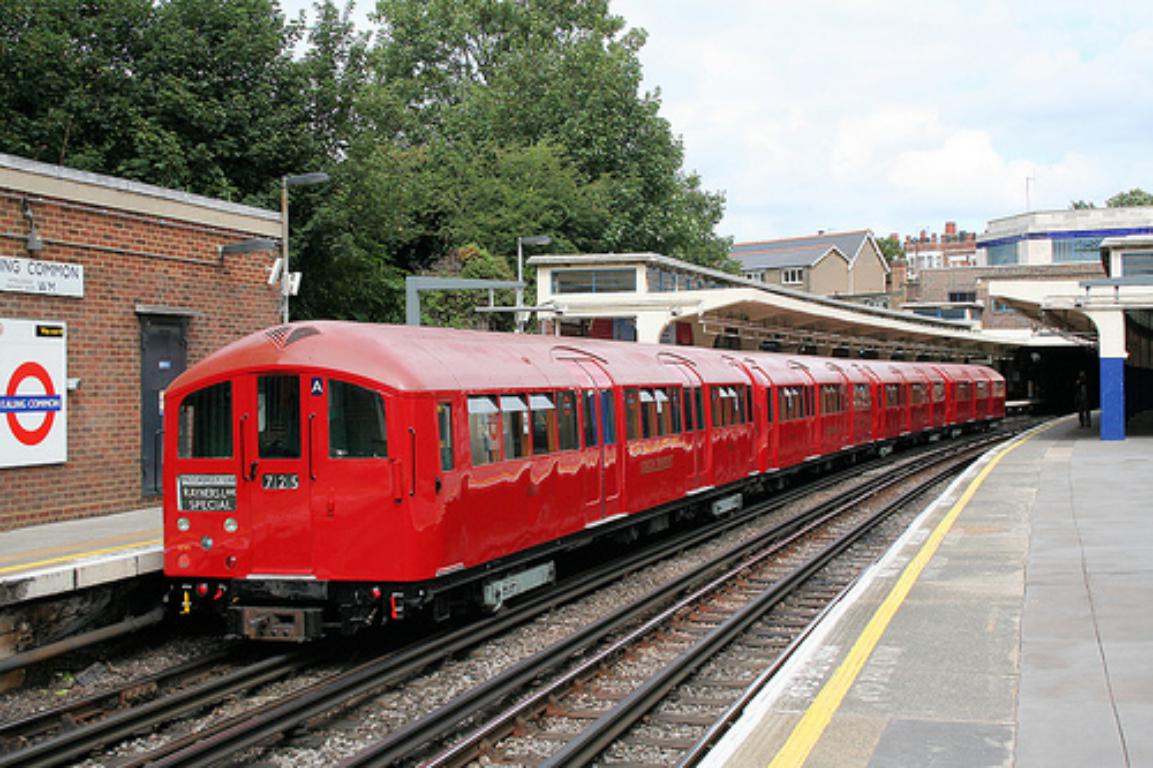 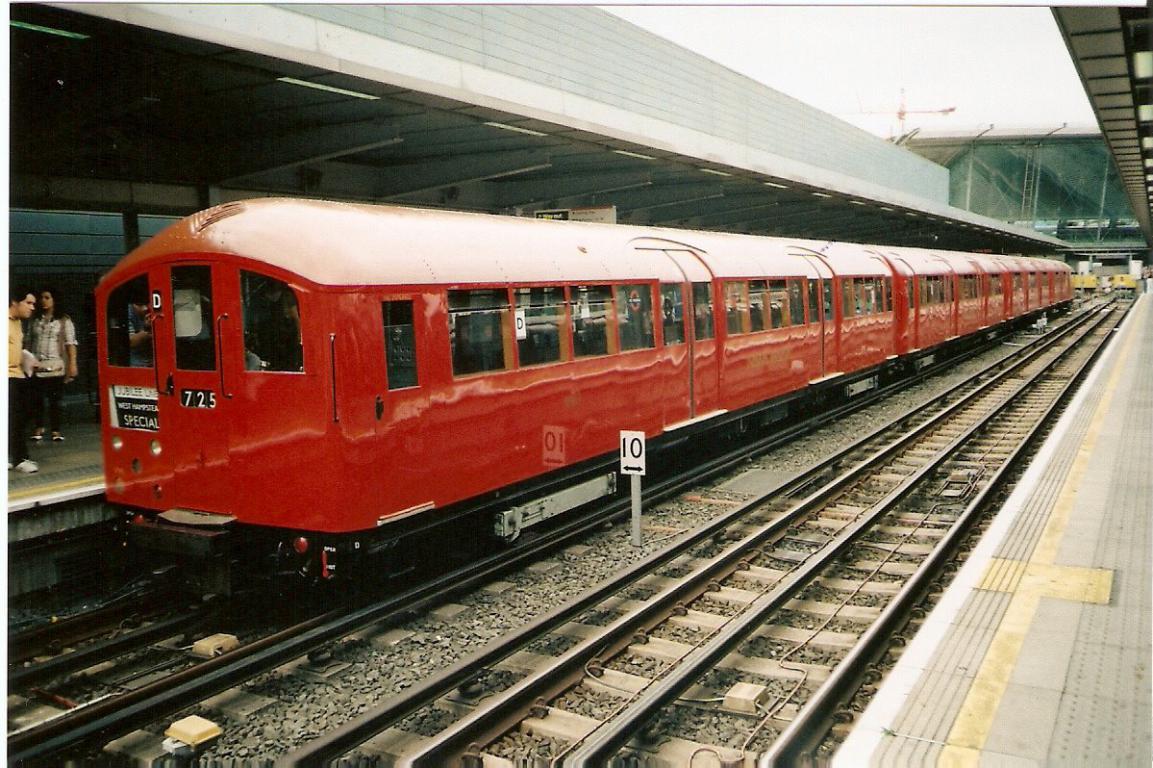 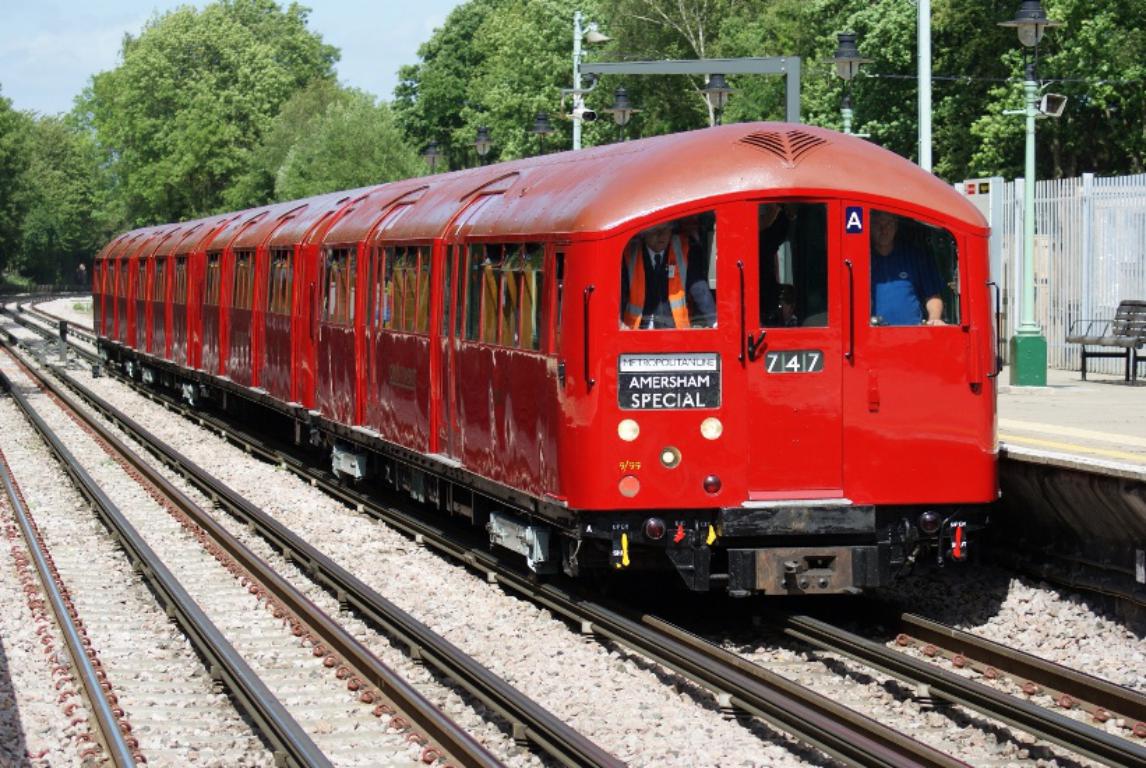