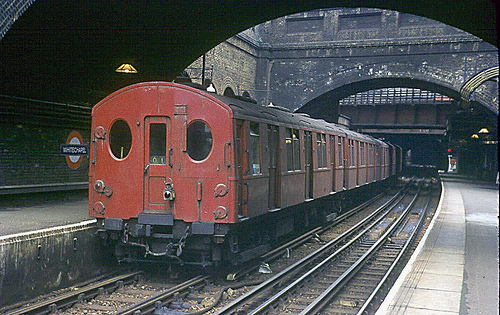 The F20/1 stock or ’dreadnoughts’ operated on the District Railway between 1920 and 1950/51 transferred to the Metropolitan Railway and operated until 1963.

The F stock was constructed for use on the DR by the Metropolitan Carriage Wagon and Finance Company as a part of the New Works Program, the fleet consisted of one hundred carriages, 40 Driving Motors, 12 Control Trailers and 48 Trailers. The carriages where built with manually-operated doors with the first train entering service on 23 December 1920.

The equipment was not standard and this stock could not be operated with another, these where significantly more powerful than the previous stocks with an acceleration of 2.4km (1.5 miles) per second. Initially there where operating difficulties because the benefits of the new trains had not been realised. The design of the front cabin had two oval windows which where separated by a central door, this limited the drivers view forward and was generally unergonomic.

The initial design was unwelcoming with a cold steal appearance, the seating covered in a Rexine-type material and grab-bars for standing commuters which where affixed to the floor and ceiling. To improve the design, a well known artist was commissioned who improved the upholstery of the seating providing armrests between the seats and replacing the grab-bars with handing straps. The stock came with first and third class accommodation when they where first introduced.

The control trailers where built into driving motors and the doors where converted to air-operation with a push button control for passengers between 1938 and 1940.

The F stock on the Metropolitan line was withdrawn on 15 March 1963 with the introduction of the A60/62 stock, however, the F stock continued to serve the East London Line until 7 September 1963.

These trains quickly earned the nickname of dreadnoughts from their initial introduction, and tanks because of their all-steal construction and because they where constructed in factories which where used to construct tanks during the First World War.