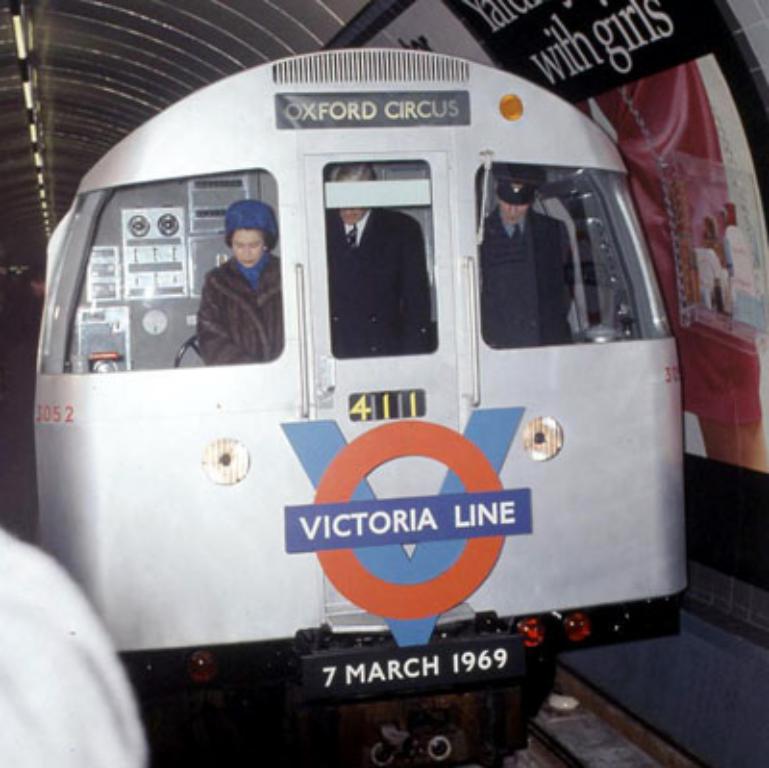 The Victoria line was opened in 1968, this was the first railway to be automated in the world with the trains, a unique trait is the whole route is submerged.

The Victoria line is the sixth busiest line on the London underground network. The line opened in 1968 and was the first underground railway to be constructed in London since the early 1900s. The line was constructed with most of the stations including an interchange to relive congestion on the remainder of the network and when it opened was the most advanced automatic railway in the world. Today, the line spans 21km (13.25 miles) and serves 16 stations.

The railway was first proposed by a working party set-up by British Transport commotion in 1948, the route followed the proposed Croydon to Finsbury Park route in 1946. The primary objective of the railway was to releave congestion in central London.

A private bill was introduced in 1955 for a railway that ran from Victoria to Walthamstow (Wood Street), a proposal that was not included in the bill was to extend the railway from Victoria to Fulham Broadway on the District line. There where also other savings on the construction that where undergone, with the infrastructure standards lower than previous and subsequent projects. The platforms at stations where narrow, with undecorated ceilings and a set of concrete stations being placed between the escalators at stations.

A test tunnel had been constructed between Tottenham to Manor House underneath Seven Sisters Road in 1959, this was incorporated into the railway.

Construction began in 1962 on the remainder of the railway. The construction included fifty ventilation shafts, one between each station at the midpoint in the tunnels. An emergency shaft was constructed at Netherton Road, where local arrangements are in place if an evacuation is ever necessary. A further emergency shaft was planned for Ferry Lane, with permission being given for its construction on 11 February 1968.

The railway was officially opened on 7 May 1969 by H.R.H. Elizabeth II who unveiled a commemorative plaque at Victoria station, then after a short ceremony, brought a 5d ticket and took the railway to Green Park.

The line opened as the first full-scale automatic railway in the world and boasted the most advanced Automatic Train Operation (ATO) system. This is operated by the train operator closing the train doors and pressing two start buttons, if the way is clear the train will then operate at a safe speed until the next station.

A 5.6km (3.5 mile) extension from Victoria to Brixton was approved during August 1967. Brixton station was intended to be used as a 'park-and-ride' station for motorists, being located next to the southern section of the motorway box. An additional station at Pimlico was approved during June 1968.

The Brixton extension opened on 23 July 1971, with Princess Alexandra taking a journey between Brixton and Vauxhall.

The name Victoria line dates back as far as 1955 and is named after the station on the railway. There where various other suggestions to call the railway such as 'Walvic' (after Walthamstow and Victoria stations) and 'Viking' (after Victoria and Kings Cross stations). During planning and construction the railway was known as 'Route C'.

It had been the intention to construct beyond Walthamstow to a surface station next to the mainline station at Wood Street (Walthamstow). Some proposals proposed extending as far as South Woodford or Woodford to allow for an interchange with the Central line. However, the decision was made to cut the railway to Walthamstow (Hoe Street) due to budgetary constraints.

The mainline station at Walthamstow (Hoe Street) was renamed Walthamstow Central in 1968, along with the opening of the underground station.

The approval of an extension to Brixton in August 1967 led to London Transport discussing a further extension to Streatham, Dulwich and Crystal Palace, however nothing has come of these.

The Victoria line was designed for all the stations to have an interchange with another line or railway, with the exception of Pimlico and Blackhorse Road. Several existing stations had to be rearranged, to facilitate cross-platform interchange. At some stations the new platforms where built either side of the station and others had new platforms constructed along with a new route and where rerouted.

This interchange on the line had enabled a variety of journeys to be completed across a series of London Underground lines.

All the stations on the route where designed in the same blue-grey tiles, with staton motifs depicting local landmarks to help identify the stations in seating recesses. The platforms are a uniform 132.6m (435ft) long, with a humped-back to allow for the storage of Gravitational Potential Energy (GPE)); as a train comes into the station it climbs upwards aiding stopping and when leaving it releases energy aiding exceleration and saving 5% energy and trains running 9% faster at an average speed of 87.2km/h.

The station at Blackhorse Road was served by mainline services on opening, with a station on the Kentish Town to Barking line, now London Overground's Gospel Oak service. Despite this no interchange was provided and the publicity clearly depicting no interchange, this was because the railway was due to be closed under the Beeching Report. An interchange was later provided, when the mainline station was rebuilt an overbridge was provided and the original station demolished.

The original station motifs at Green Park where removed in the first stage of construction on the Jubilee line and replaced with identical ones. A replica to the original was installed in 2009.

Equal opportunities legislation came into force during the early 2010s, as a result platform humps where installed in all stations except Pimlico during 2010 and 2011.

The main depot for the Victoria line is located at Northumberland Park, this is the main service and storage area for the line. To access the depot, trains run through a short branch line north of Seven Sisters station which first opened with the railway.

The Victoria line began a £10 billion major upgrade plan during July 2009, which entailed redeveloping and upgrading in infrastructure of the railway.

An upgrade to the ventilation system between 2009 and 2014, 13 shafts where scheduled to be upgraded over two phases. Phase one would replace the shafts at Drayton Park, Gillingham Street, Moreton Terrace, Purloss Road, Somerleyton Road and Tynemouth Road. Phase two would include refurbishing the shafts at Coboury Street, Dover Street, Gibson Square, Isledon Road, Kings Cross, Place Street and Rita Road. The shaft at Netherton Road, although being approved on 8 September 1967, managed to obtain its required permitted development status on 31 March 2009 when the demolition and rebuilding of the shaft began.

The concrete stairs that where installed when the railway was constructed, where removed at Brixton station in 2004 and Vauxhall station in 2006, this was to reduce congestion at these stations and prevent them from being closed due to overcrowding during peak periods.

An upgrade to the station at Victoria is also being completed. Permission to construct a 43m (140ft) pedestrian link to connect the railway to the District line was approved in the London Underground (Victoria) Act 1991 on 27 June 1991. Further permission was granted in the London Underground (Victoria Station Upgrade) Order 2009, on 18 September 2009, for the construction of a new 1930m sq (21000ft sq) ticket hall.

There have been various proposals to extending the Victoria line.

A proposal to extend the railway southwards one station to the area of Herne Hill, has been discussed by the Mayor of London and a plan published in 2013 called Mayor of London 2020 Vision. This proposed 'out beyond Brixton' by 2030. This would be constructed on a large reversing loop to remove the critical capacity restriction in the area.

A proposal supported by Haringey Council and Tottenham Hotspur is to extend the railway to Northumberland Park, this would improve transport links in the area. This was announced by the council as a 'potential Victoria line extension to Northumberland Park' in 2012 in their 'A plan for Tottenham'. Despite the support for this plan, National Rail own the necessary land and require this for their expansion plans for the area.

Crossrail 2, also known as the Chelsea to Hackney line, this would provide an additional route across central London and relive congestion on the railway, however this is still a proposal and has not been granted permission or funding.

The Victoria line runs a timetabled service every 105 seconds (just under two minutes) with an average of 34 trains per hour during peak service. This service operates over the busiest section of the railway between Seven Sisters and Brixton, however only 3 out of 5 trains continue to Walthamstow Central. A future upgrade would allow for 36 trains per hour to operate across the entire railway.

The Victoria Line, is the quickest line to pass though central London; the entire length of the line takes about 30 minuets from Brixton to Walthomstow Central.

The 1967 stock began to be replaced during July 2009, with the 2009 stock as a part of the railways upgrade. 47, 8-car units where constructed by Bombardier Transportation. This was following successful trials beginning in 2008. The new stock was mostly in service by the end of 2010 and the last 1967 stock train operated on 30 June 2011. 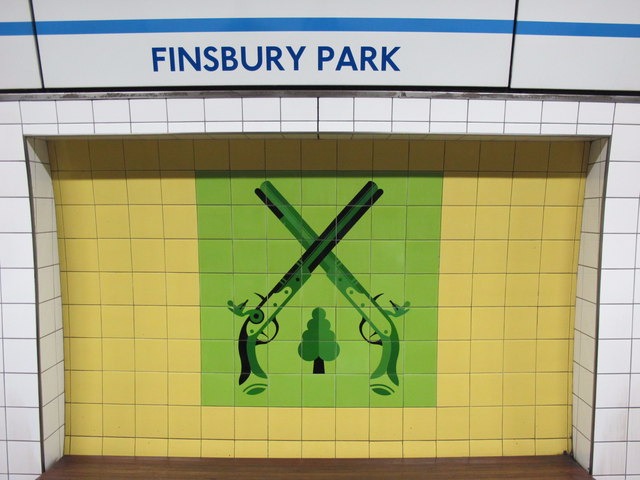 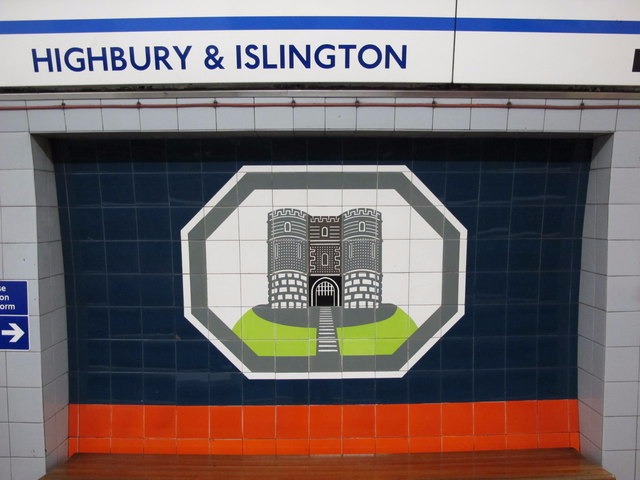 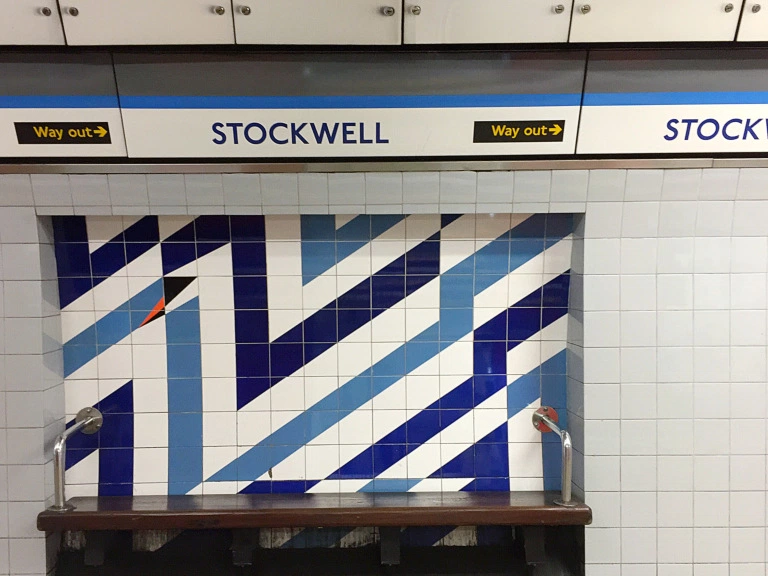 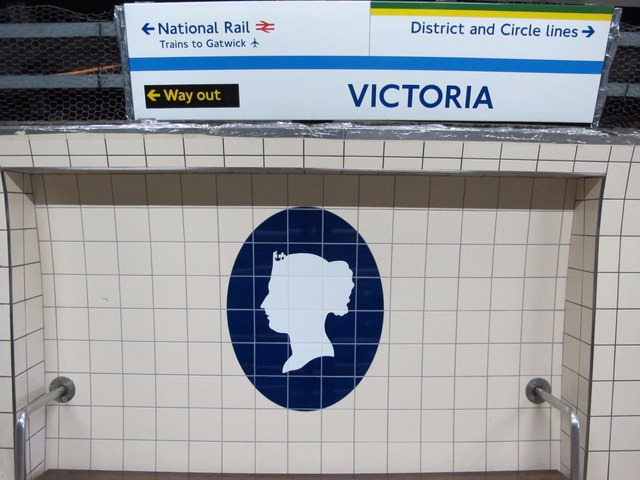